A Friendly Guide To Visiting Kvernufoss Waterfall In Iceland

A few people have yet visited the beautiful waterfall that can be reached at a walking distance on the east of Skogar. It is called the Kvernufoss waterfall in Iceland that cascades in the Kverna river. And is one of the most underrated activities in Iceland to do. This awesome and flowing mass of cool and crystal water is located in the Kvernugil area which is a scenic gorge highlighted by mega formations of hyaloclastite as well as basalt. This is where the amazing river descends to about 30 meters in height. What is so unusual about the Kvernufoss waterfall is that you can walk behind it. You can easily behold its wonder because it is accessible on foot.

From the main road itself, you can view the waterfall from a narrow-angle. Then again, a wonderful gorge seemingly hides it. Kvernufoss, being in the Kverna river originates from the southern hills of Eyjafjallajokull. The gorge is also named Kvernugil or Kvernugorge. Indeed, the waterfall is as picturesque as the gorge. However, the gorge is ostensibly narrow, giving way to the only 600 meters path to the waterfall.  Experience the joy as you walk towards it, especially when the entire surrounding turns to become somewhat isolated. A charming silence befalls as you approach the waterfall. There, you’ll find a fascinating melange of palagonite rocks, cliffs and vegetation.

The delightful Kvernufoss waterfall is in fact not indicated. Its location is not revealed even by a small sign to perhaps keep it a secret, which is better, so it seems. Nonetheless, the waterfall is situated in the nearby district of Skogafoss. This splendour of crystal cool and cascading icy water you can behold at the end of a puny path, taking about 15 minutes or so.

What to wear to the waterfall?

Be sure to wear a good pair of hiking shoes along with care and attention when treading near and behind the waterfall. It can be quite slippery. With the gorge being narrow, it is best to take photos in the middle of the day when the sky is clear and you can likewise do away with the sharp shadow.

Check out where to stay in Reykjavic (Airbnb Reykjavic) guide for a list of some of the best and most stunning 5-start hotels in Iceland!

How To Get To Kvernufoss Waterfall?

How do you get to Kvernufoss waterfall? Begin your trek at the Transport Museum situated in Skogar. Go along the slope on the east side to the direction of the gorge. Looking up the slope, you’ll be able to gain a sight of Fauskadalur, a concave featured with subtle formations of cube-linked basalt at the crest of stunted cliffs. Below thus is a scree and then a verdant slope. Proceed eastward following an old wall that hemmed a grassfield in. This location used to be a desolate land that was subsequently established with vegetation after the Kverna river pointed into a single bed instead of inundating a large area.

At the area of the river, you’ll find a prominent metal tube which happens to be a remnant of the initial attempt to bore for hot water at Skogar. Unfortunately, it failed.

You shall have reached the peak of the hillock prior to entering the gorge. From there, you’ll be able to gaze into the gorge where the east side is mostly comprised of scree and rock. Opposite that (on the west side), you will see a lush vegetation. From this viewpoint, you will not yet be able to have a vision of the waterfall. 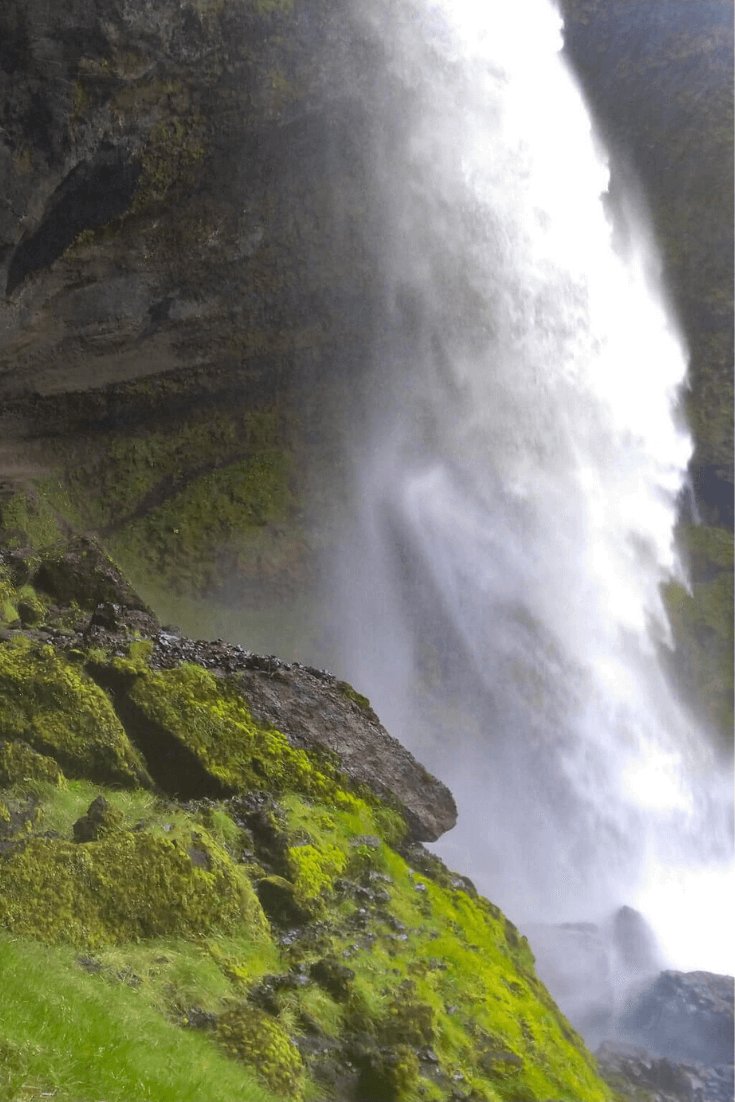 As you walk toward the gorge, you would soon come upon a rock that impels into the river. Cross such rock with care. Over that rock the gorge grows narrower and rockier. Continue to walk up the hill and you will be able to behold Kvernufoss waterfall in all its amazing glory. Fulmars all around this cascading wonder settle on every ridge in the adjacent cliffs.

From below the rock at the east side of the gorge, the Kverna river flows. Here, you can gaze at the fishes that dart deep into the pools.

A path well-marked leads you to walk down the slope on the way to the waterfall. This is where you can get hold of the sight of glassy volcanic aggregates or hyaloclastite formations.

Moving on, you’ll land at a large suspended cliff where you’ll find below a screen. A good footpath is sited. Look beyond the scree and you would hold a splendid view of the waterfall, falling in a slender surge from the edge of the cliff.

The east side of the waterfall is encompassed by an intricate terrain, and it is therefore not advisable to descend on this area. Go back the same way when you culminate with your trek.

What’s so unique and breathtaking about Kvernufoss waterfall is that you can walk behind it. It is one of the few waterbody features in Iceland with such characteristic. You can come, behold and experience the beauty and wonder of Kvernufoss waterfall all year round, including winter. However, you have to be well-equipped on your hike to this awesome waterfall during the snowy months. The coldest months tend to have ice covering the entire trail, rendering it impassable without a trusty pair of crampons. The walk can rather be tricky. Nevertheless, serious photographers can find hiking in Kvernufoss waterfall during winter to be an excellent challenge.

Hope you have an epic time visiting the Kvernufoss waterfall in Iceland. remember your camera!

Here are some other popular Iceland guides;