A sight right out of Jurassic Park may be found on the east coast of Bali, in the town of Sanur. Mother Nature appears to be reclaiming Taman Festival, a theme park that was abandoned 20 years ago, with structures draped in vines and shrubs pushing their way through the concrete.

Locals think that long-abandoned locations are home to lost ghosts, hence the site is known as the eerie ghost town of Sanur. Even if you don’t believe in ghosts or other supernatural creatures, the park’s bleak environs may be frightening.

For everyone interested in urban exploration, the Taman Festival Bali is a must-see. Even if you’re not generally drawn to abandoned structures, you should pay this site a visit.

The theme park is enormous, with hidden treasures and some of Bali’s greatest graffiti and street art created by internationally known artists. Furthermore, the park’s urban tales and ghost stories may entice you to see there for yourself.

So get on your scooter and head to Taman Festival, Bali’s best-kept secret.

Why Was Bali’s Taman Festival Abandoned? 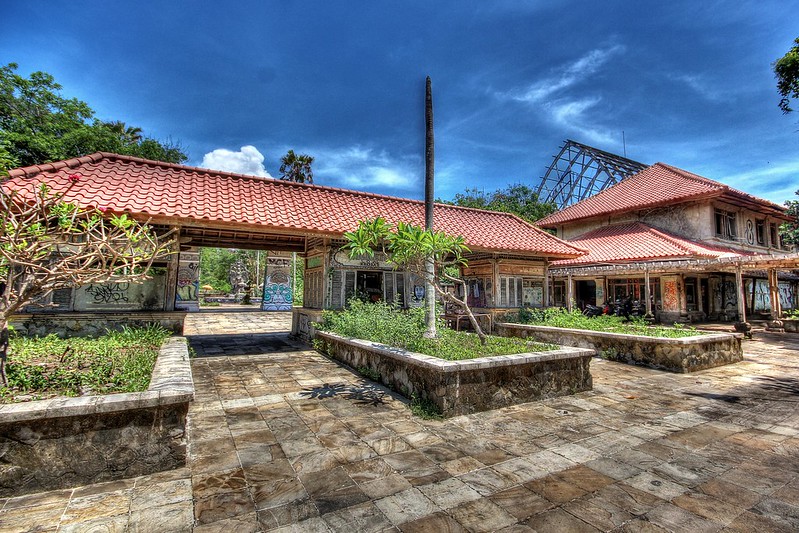 The Indonesian government and a wealthy businessman sought to establish a theme park in Sanur a little over two decades ago. They believed that by placing the park immediately north of Sanur, it would become a tourist hotspot, putting Sanur firmly on the tourist map.

Taman Festival, however, was abandoned due to a series of unfortunate circumstances and poor financial decisions, and it never reopened. The reason for the theme park’s closure is unclear; some claim it closed owing to financial issues, some claim there was a land-use conflict, and still, others claim it was hit by lightning on March 13, 1998, inflicting irreparable damage that insurance refused to cover.

Whatever the cause, Taman Festival ceased operations and has been abandoned ever since.

According to Balinese folklore, abandoned areas attract “roaming ghosts,” and Taman Festival is now considered Bali’s most haunted location, attracting spirits from all over the island. Because of these ghosts, as well as the rumored man-eating crocodile that lurks there, locals hesitate to enter.

The site was auctioned off, and it’s unclear who currently owns the park legally. In any case, albeit only semi-officially, it is open to the public.

How To Get To Taman Festival?

Get over to Sanur, but not to Sanur Beach. It’s a little farther north, so head north from the crossroads in the direction of Sanur Beach. Turn right at the next junction and continue straight to Padang Galak Beach.

From afar, you can see the skeleton of the main hall and know you’re on the right track. You will be charged 2000 IDR for admission to the beach area before arriving at Taman Festival Park in Bali.

The park’s entrance will be on your left shortly after that. The security officers will direct you up to the unauthorized bike parking area if you wish to park directly in front. They will charge you 10,000 IDR.

To avoid paying such fees, drive directly to the beach, park, then either walk back or sneak in from the beach trail.

The skeleton rooftop of the abandoned amusement park Taman Festival may be seen in the distance from Sanur Beach (where ferries to Nusa Penida depart).

When To Go to Taman Festival in Bali

The Taman Festival in Bali has no set opening hours. You may go there pretty much any time of day. During the day, you’ll share the park with other tourists, but there will never be large crowds. Even at lunchtime, there will be around 20-30 additional people, which is reasonable given the park’s size.

If you want to have the park to yourself, go early in the morning.

Go at night if you’re a lunatic who wants to spend the night in an abandoned theme park surrounded by nocturnal spiders, snakes, and bats.

Years ago, the theme park was closed down. That implies no one came to clean up after everyone had departed, and the grounds were not properly maintained. Broken glass, exposed pipelines, and shaky buildings are all over the place. Not to mention the numerous animals, such as snakes and spiders, that now live in the structures.

If you’re serious about exploring, you’ll be better off wearing good footwear. If you only want to walk to the main building to snap some photographs, flip-flops are OK. However, if you wish to tour the more isolated buildings in the bush, you should wear sneakers to protect your feet.

When visiting Taman Festival, bring mosquito repellent. The bush is abundant with stagnant sources of water, which are mosquito breeding grounds.

The park’s most notable feature is a massive metal structure directly on the shore. It’s overgrown, yet some of the finest graffiti can be seen here. Take your camera and attempt to uncover the greatest artworks concealed in the numerous rooms painted by artists such as ROA, Seth Globepainter, and Sofles.

You may locate several of the previous side buildings with even more graffiti to the left of the entryway. Some of the rooms look to be occupied by homeless persons. Be considerate of their privacy.

You’ll find yourself in the jungle if you continue right after entering the park. There are dozens of little trails leading into a tangle of trees and buildings that have reverted to their natural state.

This is where you’ll locate the famed crocodile pit, where the park’s crocodiles were left to fend for themselves, according to urban legend.

The Ayung River, which defines the park’s border, may be reached by walking far enough.

When the Taman Festival in Bali was abandoned, most of the original rides were removed. There won’t be a roller coaster here. However, considering that they were left ignored for more than 20 years, the structures that are still standing are in decent shape.

Is Taman Festival Good for Photos?

Apart from the uncanny beauty of nature interacting with concrete — jungle merging with concrete jungle – the graffitis are definitely worth the journey. There are genuine (although little) paintings and portraits, not simply tags and stains.

The street art around Taman Festival Ghost Town changes all the time, but the four-tongued ghost near the entrance and the hovering owl in the Great Hall seems to have lasted for years.

There are so many amazing photo options since it is very hidden from the street. There are no crowds, and you can really take a walk in nature. That can be difficult in Bali since there are so many paddy fields, unclean beaches, and busy rural roads with no sidewalks.

What Should You Do After Visiting Taman Festival?

After touring Bali’s rainforest and the abandoned theme park, you’ll be fatigued. There are a few small food carts near the parking lot where you can purchase inexpensive traditional dishes and cool drinks.

Only a few kilometers up the road are other larger eateries. After such an interesting day, why not go back to Sanur and relax by the beach with a nice beer?