You’re probably daydreaming of enjoying a cool drink with the soft sand between your toes and the sea wind in your hair. When you visit this island of the gods, this may easily become your reality. When picking what to drink in Bali, keep in mind that there is something for everyone.

You will have made the right decision whether you are enjoying a lime juice spiked Arak cocktail in a coconut at the hotel pool bar or sipping a glass of Jamu after performing yoga in Ubud.

11 Local Drinks You Should Try in Bali

Here are some native drinks to try in Bali, especially if you’re seeking for something other than water or bottled sodas to satisfy your thirst on a hot day. In fact, there are far too many traditional cocktails on the island, since they are as diverse as the small populations that make them in the highlands and along the coast.

We’ve compiled a selection of the most popular Bali cocktails for you to sample as unique sweet refreshments.

Most of these refreshing beverages and dessert drinks may be found at local roadside warung stalls or food carts along the beach – especially in the main resorts of Kuta and Legian, as well as at sophisticated Indonesian restaurants. 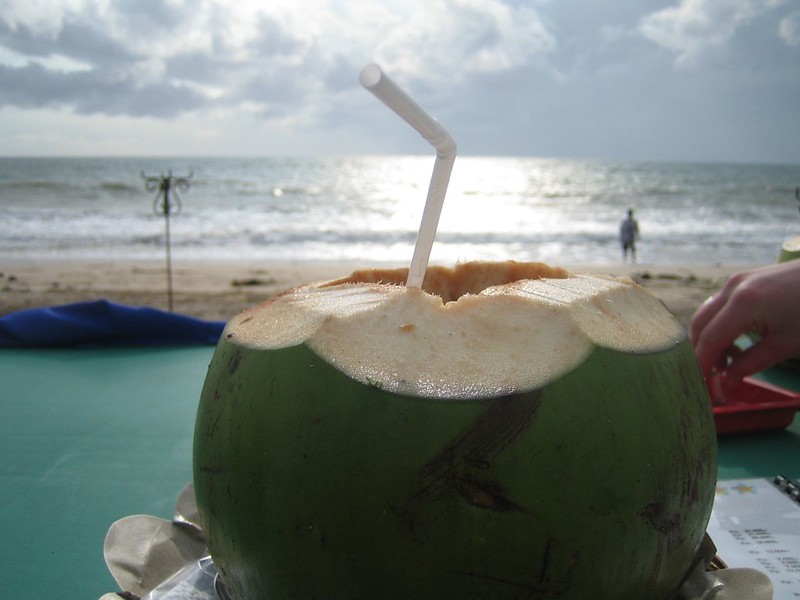 Black jelly, also known as cincau in Bali, is a popular component of dessert cocktails throughout Southeast Asia. The jelly is manufactured from the leaves of the Chinese mesona plant and is commonly offered in powdered form in markets, similar to carrageenan (seaweed) jelly.

The jelly is sliced into slices or cubes after processing and served with coconut milk, syrup, and ice or condensed milk. It doesn’t have the same viscosity as green grass jelly. It’s offered for less than a dollar a glass at local restaurants and is said to help with fevers, hypertension, and constipation.

Es daluman, similar to es cincau grass jelly, is a delightful jelly drink created from the leaves of the Cyclea barbata plant. It’s widely available at Indonesian restaurants and warungs. Although the flavor is plain on its own, it becomes a delicious dessert drink when combined with coconut milk and sugar syrup.

In addition to assisting digestion, the drink, like carrageenan (seaweed) jelly, is believed to have therapeutic effects such as lowering blood pressure, and the leaves are high in antioxidants. A glass of wine costs roughly a dollar at a neighborhood eatery.

Bali’s traditional spirit is made from fermented white rice. Before being extensively consumed and manufactured in contemporary times, this alcoholic beverage was employed for rituals and traditional rites.

Due to its distinct flavor and cultural value, this drink is becoming a favorite gift among foreign travelers. Arak Bali is more than simply a fun alcoholic beverage; it is also used to warm the body and ease nausea in cold conditions.

You will be thirsty and dehydrated after hours of surfing or diving with the enormous manta rays. The ideal remedy is contained within young coconuts straight from the palm. Coconut juice is low in calories and high in electrolytes and antioxidants.

This is nature’s version of a sports drink, and it’s really healthier than the ones manufactured by scientists. Look for sellers selling ice-cold coconuts for a very refreshing experience.

Bintang is Indonesia’s most popular beer. And you won’t find it anywhere else. It tastes and smells like an American Pale Lager.

Mutated Kelapa Kopyor coconuts are used to make this delightful drink. In contrast to the more robust construction of the typical coconut, the flesh on the wall of these mutant coconuts has a spongy nature. The sugar content is higher and the fat content is lower in this spongy fruit.

Loloh was originally a traditional beverage from the Bangli village of Penglipuran. Loloh possesses qualities that can help with disease prevention, treatment, and improvement. Loloh Cemcem has a strong herb fragrance and may not appear edible when first opened.

But now, Loloh is available in a variety of flavors that aren’t entirely bitter, such as Turmeric Loloh with Tamarind, which has a tart and perfectly balanced sweetness, making it ideal for after a hard day’s work.

There are many various forms of Loloh, such as Loloh Don Kayumanis (Cinnamon) to ease digestive devices, Loloh Don Sembung (Sembung Leaf) to alleviate cold cough fever, and many more types of Loloh.

One of the most popular Balinese cocktails is Kuwut Ice. Kuwut Ice seems to be campur ice or teler ice at first glance. Kuwut ice, on the other hand, is produced from a variety of fresh fruits, including coconut and cantaloupe.

It makes you feel good just hearing it, and it goes well with Bali’s tropical vibe. Some people add lime juice to this drink to give it a tart flavor. Furthermore, kuwut ice is easy to come by in Bali, as practically every restaurant serves the drink.

A traditional Balinese drink that is so well-known that its followers are found across the country, not only in Bali. Coupled with the availability of arak, which can be found in a variety of locations around Bali. Coconut water is used as the starting material, which is then distilled.

The alcohol content of coconut water is then stored as a result of the distillation process. Even yet, if you want to taste Balinese wine, you must be cautious. Because it can’t be blended with other beverages like soda, fruit, or juice.

Jamu is a traditional herbal beverage from the Indonesian island of Java. It’s well-known and well-liked all around Indonesia. Jamu is available in a number of formulas, each with a specific treatment or aim in mind, ranging from digestive issues to virility enhancement.

It’s prepared with natural components including plant roots, barks, flowers, seeds, and leaves. Honey, milk, and eggs are occasionally added for flavor and to enhance the healing benefits.

At traditional marketplaces, national brand booths such as Sidomuncul and Djamu Djago may be found. They offer packets for around a dollar, and all you have to do is add hot water and your ingredients.

Many Indonesians were obliged to plant coffee during the Dutch colonization period, even though they were not permitted to enjoy the much-loved bean. A coffee grower discovered intact coffee beans among the droppings of a special variety of civet known as luwak.

The farmer was curious, so he cleaned and brewed the coffee cherries. He had no idea that the coffee he made that day would be prized even more than normal coffee and considered the most expensive coffee on the planet. The fermentation process that takes place inside the civet’s digestive tract gives the coffee a distinct, mild flavor that many people enjoy.

Cost of Drinking Alcohol in Bali

Bali is one of the few places in Indonesia where the population is not mostly Muslim. With it comes a more laid-back attitude toward alcohol and the regulations that govern it. Although the culture on the island encourages social drinking, government rules nonetheless impose high tariffs on all alcoholic beverages.

While it isn’t the cheap drinking paradise of Thailand, you can still get a cool beer or a locally distilled Balinese cocktail for a fraction of the cost back home.

Is Drinking Alcohol in Bali Safe?

When ordering mixed cocktails in Bali, there is no way of knowing if the alcohol was prepared in a safe manner or if the bottles of liquor were topped off by western producers.

Many visitors have gone blind as a result of drinking these methanol-laced liquors, and countless more have died. We’ve taken a chance, just like so many visitors and residents do every day, and have had no problems.

If you feel the risk is too high, stick to beer, pick up a bottle of your favorite spirit at the airport, or stick to trusted store brands of booze. Although these occurrences are rare, you may want to be cautious so that your trip does not end in catastrophe. Drink responsibly and remain safe!

A beach day for many people isn’t complete without a chilled beer or drink. But, since you’re in Bali, why not sample some traditional Balinese cocktails? There’s no need to sample a beer or a modern drink; Bali has a unique drink that is as refreshing.

These uncontrolled drinks will remain a part of Bali’s drinking culture, not only for natives but also for the throngs of beachgoers. If you’re lucky enough to be asked to an informal drinking ritual with some natives, just follow their lead and recognize your boundaries.

You will most likely be the first to sip from the shared cup as a visitor. Pour a shot and pass it clockwise, then repeat the process.