Looking for tours around Phi Phi Island for shipwrecks?

I have you covered!

A shipwreck is an old vessel which sinks or breaks up while still afloat. A shipwreck may be deliberately sunk, such as a naval minefield; accidentally sunk, such as during a storm or collision; or intentionally scuttled to avoid capture by enemy forces (who would love to be captured alive? 😃).

The term “shipwreck” can also refer to the loss of life and property resulting from a sinking or capsizing of a vessel. In many cases, the wreck will become a protected site under maritime law. 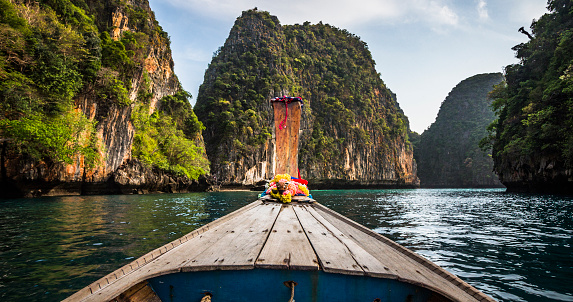 Many of the top diving locations in the ocean feature manmade reefs or wrecks that have sunk over time. The island of Phi Phi is no exception. The legendary King Cruiser wreck (sunk in 1997) and the Kled Gaeow wreck are also right on our doorstep (sunk in 2014).

The ship was decommissioned in 2014, and on March 19, 2014, it was donated and purposefully destroyed through controlled explosion to establish a new dive destination. The 47-meter-long wreck is practically upright (20-degree list) and faces north-south (bow-stern) around 800-1000 meters east of Piley Bay (Ko Phi Phi Ley).

There are two doors on the main deck, near to the steps, that lead to a spacious cooler room or a compartment that used to hold the anchor and chains. This compartment can also be reached through the elevated deck’s roof hatch opening/porthole. The mast (13.5 meters long) is positioned across the Main Deck, towards the center area, and has been broken so that it does not obstruct any boats passing overhead.

On the deck, there is a wide 3 meters long hatch through which you may see down to the deck/hull below and, if desired, penetrate. Be warned that once you’ve entered this entrance, the path to the core area is dark, requires a guide rope, and has poor vision.

Diving to the Kled Kaew Shipwreck

We’ll meet in the morning at the diving shop on Moo Street, only a short walk from the Ko Phi Phi Don port. We’ll set sail from this Thai island to several locations in the Andaman Sea, one of the world’s diving hotspots!

The first dive will be to the wreck of the Kled Kaew. This ship, one of the Royal Thai Navy’s support ships, sunk in 2014. The 380-ton ship, which is 160 feet long, will spend eternity at the bottom of the Andaman Sea. The ship, on the other hand, was purposefully sunk in a controlled way so that the fish in the region might seek sanctuary beneath the ship’s hull.

During the dive, we will witness the amazing marine life that lives beneath the Kled Kaew. It’s a hotspot for biodiversity, with lionfish, scorpionfish, yellowtail barracudas, and other incredible species living 100 feet beneath the surface. In fact, this section of Thailand has become one of the most popular underwater photography destinations in the world.

We’ll return to the boat after this first dive for a well-deserved break before sailing to the second dive site in the Andaman Sea. Then it’s time for a second great underwater adventure.

Finally, we’ll make our way back to the original departure dock, where we’ll arrive after midday.

The ferry King Cruiser sunk off the coast of Phuket on May 4, 1997. It was on its way from Phuket to Koh Phi Phi when it collided with the submerged pinnacle of Anemone Reef, 10 kilometers from Phi Phi. The collision ripped the hull off and broke the reef in half! 😮 The ship took two hours thirty minutes and another kilometer to sink. The 561 persons on board were all rescued.

The 85-meter-long boat has become a popular artificial reef that complements Anemone Reef. It’s 30 meters deep and flat on the bottom. The wreck’s shallowest portion is roughly 15 meters deep. The stern, where a line connects you to the surface, is the safest and simplest method to go in.

The vehicle deck can be viewed from there. Soft corals cover the majority of the wreck, attracting a diverse range of species such as tunas, barracudas, and trevallies. Lionfish, nudibranchs, and moray eels are among the biodiversity. Larger fish, such as leopard or bamboo sharks, turtles, and whale sharks, are occasionally encountered.

With depths ranging from 12 to 32 meters, the King Cruiser wreck is an easily accessible divesite. Although, when pieces of the disaster began to fall, entering the debris has become slightly perilous.

The wreck has attracted a variety of marine species over the years, including schools of jackfish and many scorpion and lionfish. Most divers prefer to take three dives on this excursion since it is just two to three minutes from the wreck to two more fantastic divesites: Anemone reef (where the boat struck) and Hin usang (or sharkpoint), all of which provide spectacular and diverse marine life.