The Los Glaciares National Park was established in 1937 to preserve the glaciers, forest, and rare species of plants and animals. It is located in the southwestern part of Santa Cruz Province near the border between Argentina and Chile. The park covers the Andes Australes region of Argentina. A large area of the Andes Mountains is filled with ice and snow on the western part, but on the eastern part is the dry Patagonian grassland.

This park has an area of 600,000 hectares filled with soaring mountains, ices, glaciers, and glacial lakes. It was named as Los Glaciares due to the existence of several glaciers in the area. These glaciers are fed by the gigantic South Patagonian Ice Field which occupies the half portion of the park. The ice field also referred to as Southern Patagonian Icecap feeds 47 massive glaciers and 13 of them flow down towards the Atlantic Sea. Additionally, there are over a hundred smaller glaciers which are separated from the ice field.

One of the longest lakes, Lake Argentino, has a length of 160 km. It is being fed by three gigantic glaciers including Perito Moreno, Upsala, and Spegazzini Glaciers. With its stunning natural beauty, glaciers, mountains, endangered species, and scientific significance, UNESCO proclaimed the Los Glaciares National Park as a World Heritage Site in 1981. 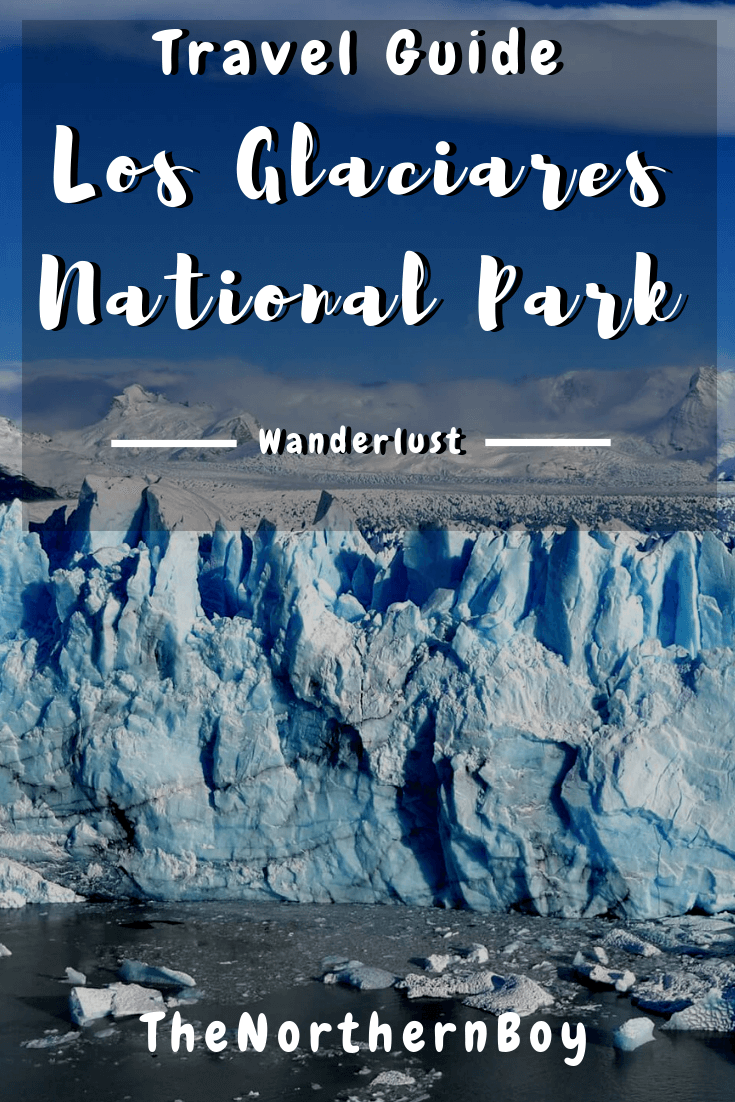 How to Get Here?

The best access is via El Calafate. This town has its airport that can access to the different parts of the country. Another route would be from the north where you will go through Río Gallegos. Afterwards, you will travel towards El Calafate. Another way is to start at El Chaltén.

Keep in mind that these towns also offer various services such as gas, diners, and lodging. You can also find some campsites at Lake Viedma and Lake Argentino.

Check out the Google map here:

The Park is dominated by ice, 2,600 square kilometres of the area is filled with ice. There are about 47 major glaciers in the park and one of the most well-known and accessible is the Perito Moreno Glacier. This is one of the few glaciers where visitors can ice hike. It is located in the south portion of Lake Argentino and has a height of 60 meters with a front wall of 5 km. To get here, you must travel to El Calafate. Its name is taken from the famous Argentinian explorer Francisco Moreno.

The Upsala Glacier is another huge glacier that has a width of 10 km. and an elevation of 50 meters. All in all, there are approximately 356 glaciers in the park.

The Viedma Glacier is another spectacular glacier feeding the enormous lake of Viedma. This can be accessed through El Chalten. Those who are trekking in the Fitz Roy region can get to see other less popular glaciers such as Torre and Piedras Blancas. 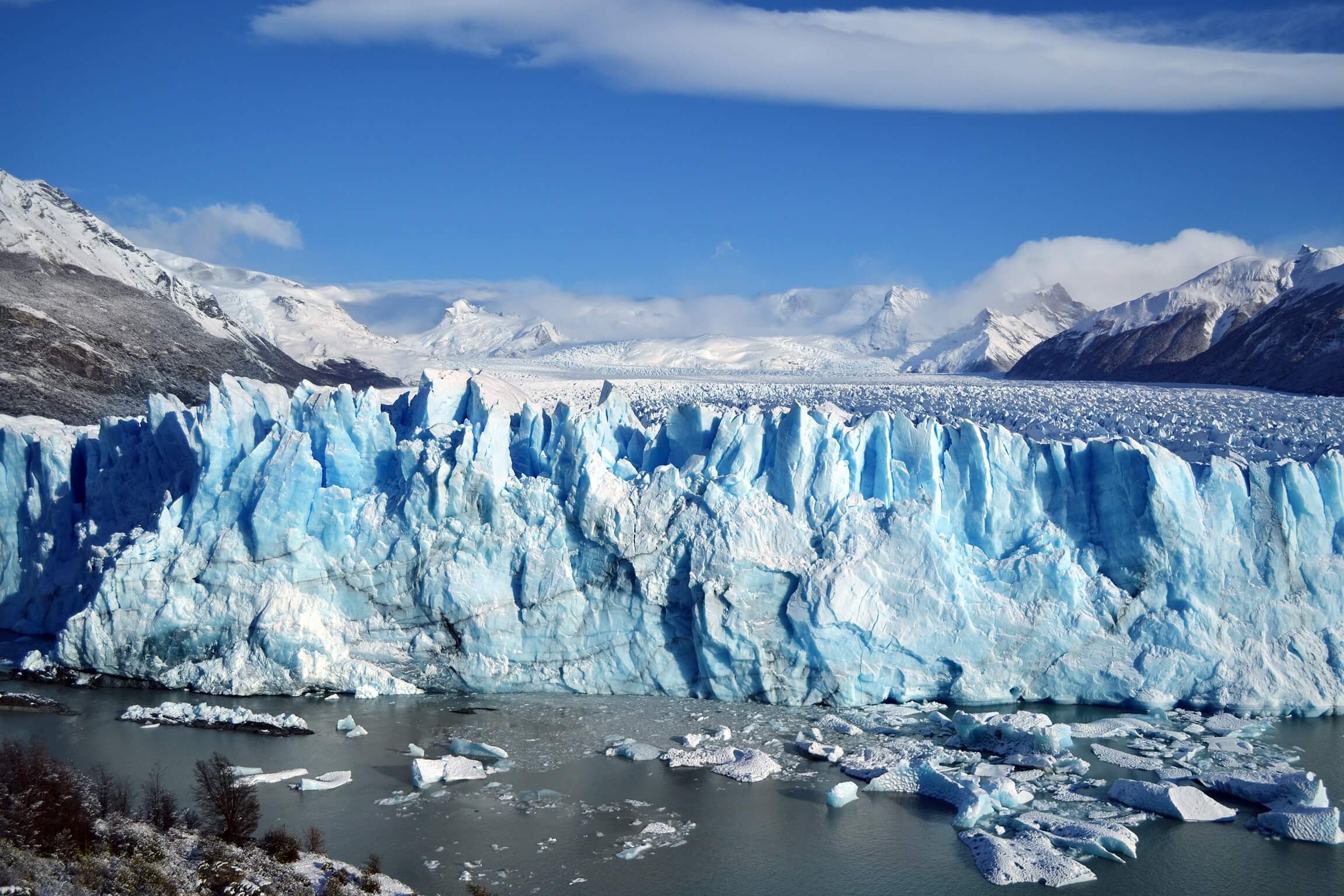 The Los Glaciares National Park consists of two huge lakes. On the south is Lago Argentino and on the north is Lago Viedma. Among the two lakes, Lago Argentino is the largest. It reaches to 600 square miles. The water from the lake comes from La Leona river as well as from the three massive glaciers including Perito Moreno, Upsala, and Spegazzini Glaciers. These waters will flow down to Santa Cruz River, then will proceed to the Atlantic Ocean.

The Lago Viedma on the north is located near El Chalten and has a length of 80km. It is being fed by Viedma Glacier and the scouring effect of the fading water just looks fabulous.

Aside from the glaciers and lakes, Los Glaciares National Park is also famous for its peaks. The peaks of Los Glaciares National Park are what makes trekking here world famous. The popular Mount Fitz Roy is filled with granite can be seen on the northern part. Originally, the indigenous Tehuelche people named this mountain as Chalten which means “peak of fire”. But in 1834, its name was changed to Fitz Roy in honour of Captain Fitzroy, the captain of Charles Darwin’s ship. With an area of 3,375 meters, the peak of Fitz Roy is extremely difficult to climb. Mountain climbers will only climb this peak at least once a year.

Another impressive peak that you should visit is Cerro Torre. Although this is not as popular as Fitz Roy, yet it is also hard to climb. To get here, you have to start from El Chalten and take the Laguna Torre day hike. 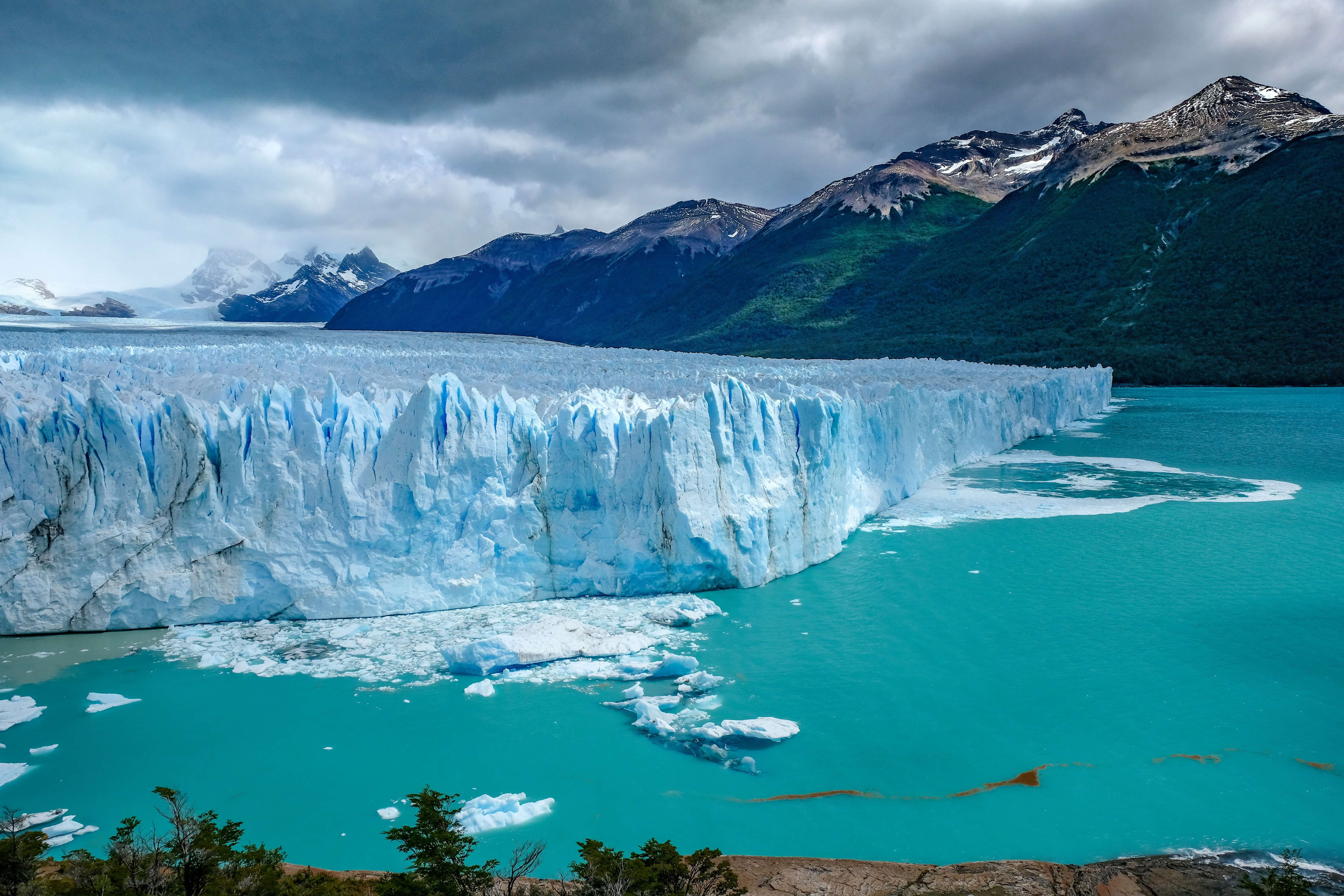 If you are an adventurer who wants to explore the Patagonian wilderness, then you should try the ice cap. Get your snowshoes, crampons, and ice-axe ready so you can start walking on the ice. The South Patagonian Ice Cap has an area of 40km on the eastern and western part and reaches to more than 400km on the north and south.

It covers the Los Glaciares National Park and other parks in Patagonia. Sometimes Marconi Pass or Paso del Viento is included in their expedition which can usually last between 8 to 10 days.

The Los Glaciares National Park is home to more than 100 species of birds which can be seen in the forest and grassland. Some of these species include Andean condor, choique, torrent duck, black-throated finch, yellow bridled finch, white-throated caracara, and others. Black-chested buzzard eagle and condors can also be seen on the north side of the park.

While on the shores of lakes and lagoons, you can see the presence of the Magellan oystercatcher. There are also other species which can rarely be seen including the austral rail and the cordilleran snipe. Rainbow trout and lake trout both exists in the large lakes of Argentino and Viedma.

Aside from the birds, other animals can be seen in the park. However, the information about them is only limited. According to some reports from the rangers and observers, they have seen a red fox, gray fox, European hares, horses, and cows in the area.

The Los Glaciares National Park is one of the few places where you can find a huemul. This is the native deer of Argentina and Chile. Sadly, there are only a few of them that exists. In 1976, they were declared as endangered species. 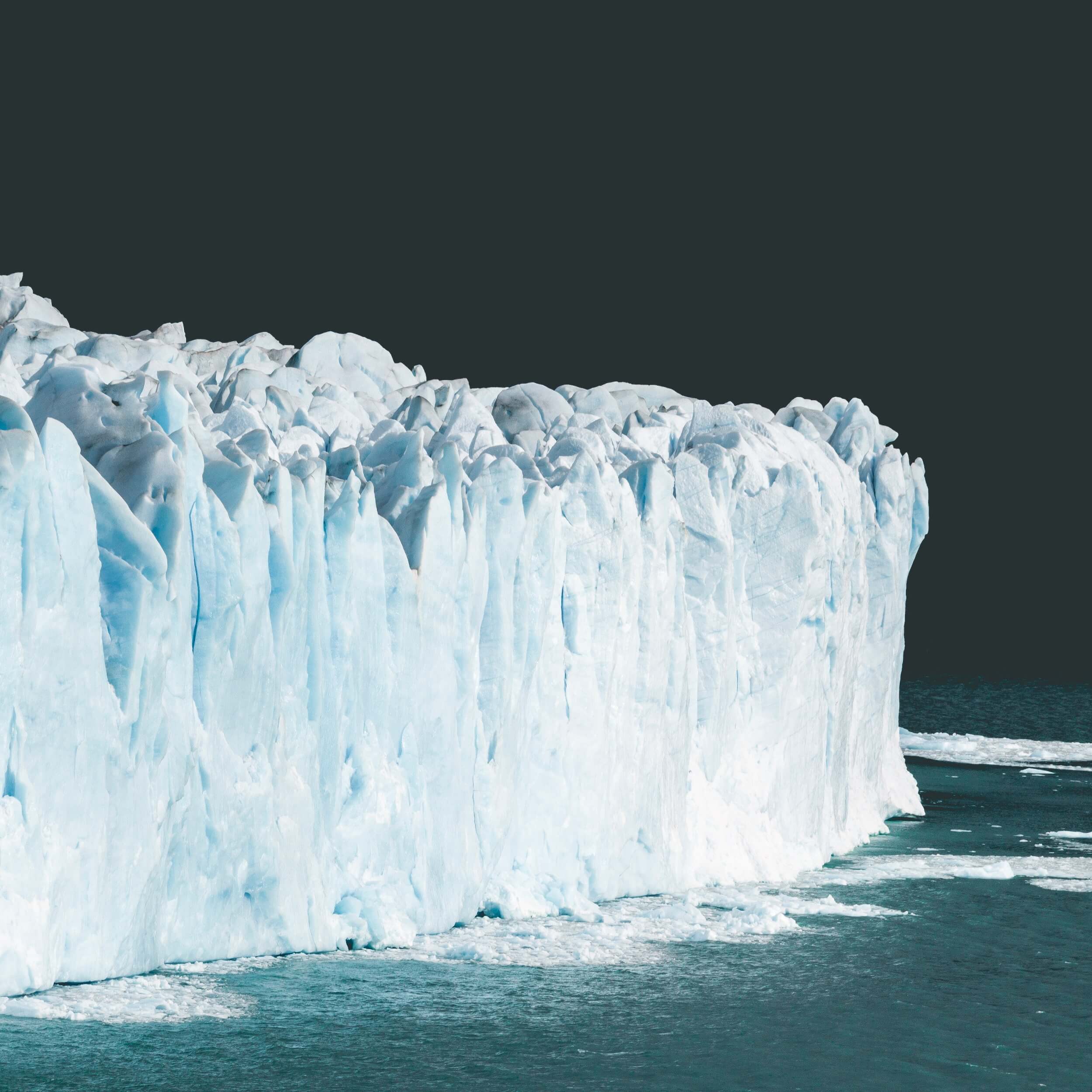 The entrance fee to the Los Glaciares National Park is about £16. Also, if you want to join the trips to see the wonderful glaciers, then it will only cost you around £21. One of the easily accessible glaciers is Perito Moreno. You can reach it through the beautiful town of El Calafate.

Things to Do in Los Glaciares National Park

This park is perfect for various activities due to its varied ecosystem. There are natural areas in the region so you can do any activity that you want. A perfect place for all adventurers. Trekking can be done around El Calafate, on El Chaltén or even on the glaciers such as Perito Moreno. This is a perfect activity for all ages. The most important thing is you must wear your proper outfit and shoes. Be sure to wear sun protection such as sunglasses, cap, sunblock, and others. 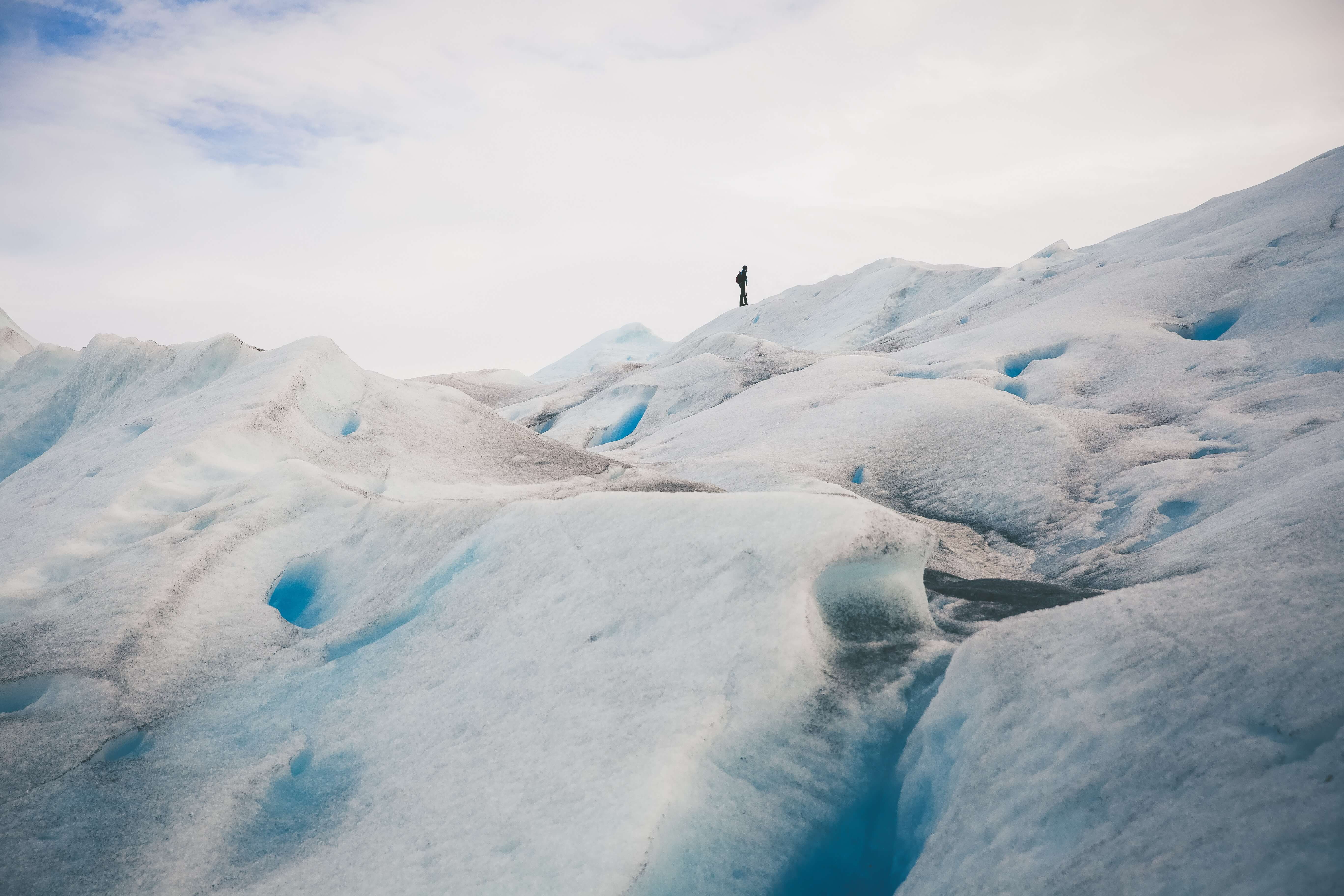 Back horse riding is another fun activity for tourists. Argentina is well-known for its quality horse breeding. You can ride while enjoying the beautiful sceneries of the landscapes and the terrains. You can either ride freely on your own or participate in organized trips.

Fishing is also another great activity that you can do here. You can find different kinds of trouts in lakes and rivers.

Rafting is an exciting sports activity that you should try. You can do this along the rivers of Santa Cruz and De Las Vueltas which are located in El Chaltén. One of the popular activities that you can do here is bike riding. You can enjoy bird watching and sightseeing while riding your bike.

Hope you’ve enjoyed this complete guide to this epic destination!